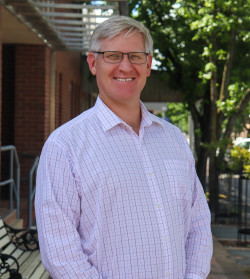 James Dugdell joined Yass Valley Council in January 2021 after a 26 year career as an Engineer in the Australian Army.  Since graduating from the Australian Defence Force Academy in Canberra with a degree in Civil Engineering and completing training at the Royal Military College in Canberra, James’ Army career focused on the delivery of infrastructure in Australia and overseas.

James’ career highlights have all been in positions where he has been able to support communities in delivering better infrastructure; be that delivering water supply and sewer infrastructure in Iraq, schools and roads in Afghanistan, or post disaster relief in Fiji.  James has also worked on the planning and delivery of infrastructure, training and health benefits in remote Australian communities as part of the Army Aboriginal Community Assistance Programme, the highlight being the seven month deployment he lead to the remote community of Fregon in the Aṉangu Pitjantjatjara Yankunytjatjara lands in north west South Australia in 2013.

James chose the Yass Valley due to the chance to return to a rural community but still remain in close proximity to Canberra. Taking a leadership position at Council will also allow him to draw on his Army experience in leadership and infrastructure delivery to continue to build and improve on the provision of services to the community.  The predicted population growth and implementation of the Settlement Strategy provide a solid foundation for future infrastructure development and James is looking forward to the opportunities and challenge that they bring.

In his spare time, James enjoys running and cycling and now he has the space, will return to gardening to grow fruit and vegetables.